Well sorry again to be long in the tooth with updates!

So far so good, this year I implemented a few "upgrades" I tried a few "new" things... and of course learned some new stuff!

So let's start out with the seeds that I planted in November, This was the first time I grew seedlings in the greenhouse. I kinda messed up and planted way too many seeds... A counting error is to blame, I believe this is an affliction most daylily people have.

I planted Roughly 4500 seeds, which made me use every last availible inch of "overflow" space I had made availible. 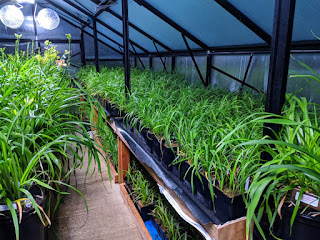 Now, I never really meant to use the bottom, only as "overflow" but I went 1500 seeds past my limit... and here we were. 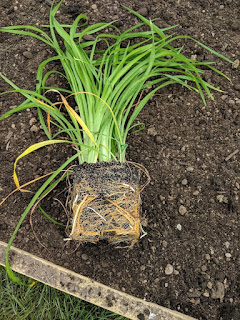 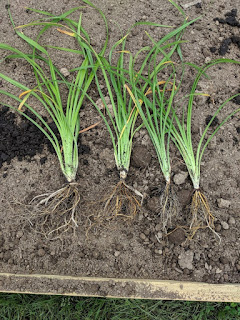 Compared to my first year of growing seedlings indoors, under lights... These plants were much larger, with much larger root systems. I am overall very happy with them, but I will have to address the under the table lights for next season.

What I'm changing for next year-

Will Plant first flush of seeds in the last week of July, giving them an additional 3 months of growing time.

Better lighting under the benches

So, onto the Potted mature plants!

I pulled the pots in later this year, by almost ten days hoping to delay bloom by about the same amount. didn't work... I got bloom a week earlier. Dont ask me.. the temps stayed the same, etc etc etc.  My only idea is... most potted plants were hold overs from the year before, so they were well established in the pots this year Vs. last year.

I had solid bloom from End of march till the second week of May. 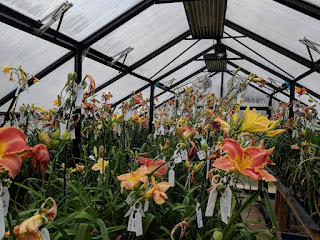 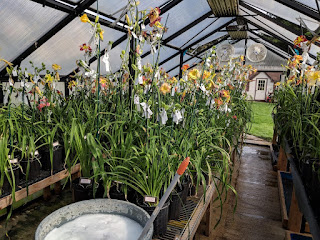 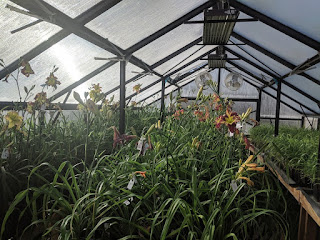 This year, I wont be crossing on plants outside except for my selects and seedlings. So I am basically done with seeds this year.

I am going to attempt to build all the benches in the greenhouse as flood tables.  It was so effective in the speed in which I can water but also in the effectiveness in actually getting the pots "wet". As we all know, once a pot dry's out... well its a bit of a battle to get it wet again.  Not with the flood tables. It really made it easy to avoid getting a dry pot mixed into the bunch.

Downside?  Flushing the pots is a bit difficult.

Pest control!   Did I get pests this year?  OF COURSE!

They popped up in march, spider mites of course.  I treated them with a knock down spray, and then bought predatory mites, spider mite destroyers, etc etc etc.

I'd really like to give everyone a happy ending here, but after about 200 dollars in predatory mites, and 5 or 6 applications of them. They were not effective, the spider mite population existed, and grew beyond their control.

I have kept spider mites in check with Tri mixed pesticides, with rotating MOA's

They haven't been a problem for me this year after that.

Not much else really going on in the greenhouse, outside bloom has started, new seedlings are popping up, and I am collecting pods and picking out crosses to plant next month! 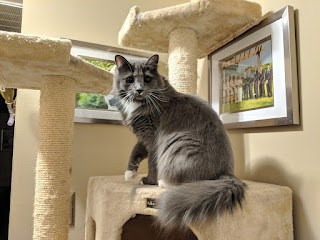