Time to get your chill on...

So, I bet you are slightly wondering... What do you do with the dormants?

Good question, Some dormants or "deciduous" Daylilies will perform fine without having a cold period, and notably there are still quite a few that will perform in lackluster fashion if not given that (Think RFK)

To make the management of all my plants as easy as possible, I take all of my pots out in early november.  I leave anything that you would consider tender inside, but hardy EV's and All SEV plants go outside also.

I do this for two reasons, I want bloom on a set cycle and a safeguard against rust.

The pots are all placed within a wind protected wood framed box, and once the foliage goes down, I will cover the pots with frost blankets.  I am trying to keep wild temperature swings from happening when doing this. I also want to avoid daily Freeze/Thaw cycles. 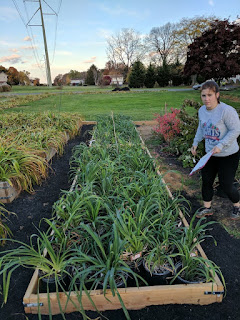 Now the plants will stay outside till roughly the end of december. After that I will bring the pots inside. Once Inside they will slowly defrost, I will separate Tet pots from Dip pots, and then top dress the pots with alfalfa pellets, and slow release fertilizer. I won't start watering the plants till they break their dormancy, and then I will start mildly fertilizing them at about 50-75 PPM Nitrogen. 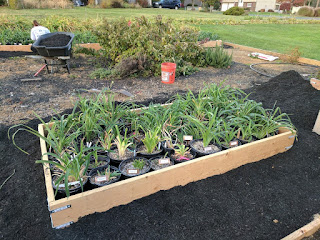 Now in this next picture you can definitely see the difference between my outside plants, and everything that was growing in the greenhouse.  The picture below was taken November 6th of this year.  As you can see, I got a solid 6 extra weeks of solid growth from my plants at the end of the season. 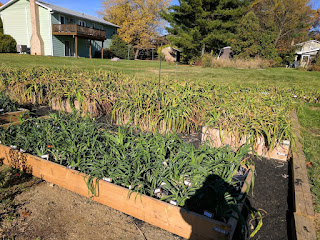 So once the pots are inside, they break dormancy... then what?  Well this depends on how much money you want to spend and when you want bloom among other factors. Be it, this is my first winter and I really dont know how much propane I will be using I personally would like to cap my supplemental heating bill at 500 gallons of propane.  That might sound like a lot, but it really isnt. Because I have seedlings inside, I will heat from November on.

So I can't really tell you what's best here... but I will tell you my plan.  I plan on keeping an average temperature of 60 degrees until Feb 1st.  At that point I will then increase my Temp to 65 degrees. On march 1st, I will then maintain 70 degrees to induce bloom In april.

There are a few reasons why I am doing it this way... For starters, In late december the Daylength is an abysmal 9 hours and 19 minutes.  Which means I am only getting about 7-9 hours of solar gain, and the rest of the heating is on my dime.  So keeping the temp low during January allows me to keep the plants growing, and conserve energy.

So at the end of february, a few things improve. Typically for my area exterior air temps start climbing,  Sun angle starts improving for better light distribution within the greenhouse, and day length is now 11 hours and 20 minutes. So now I am getting 11-12 hours of free heat, I am getting better solar gain within the greenhouse, the plants are getting better light, and a longer day for growth. So now is the time to kick them into GO mode!

March will be a funny month, I suspect it will be like my October sort of. The air temps outside will be 40-55 but the sun angle and daylength will again improve as will the amount of solar radiation captured by the greenhouse.  This will help and hurt me. The helpful part will again be almost 13 hours of daylength at the end of the month, better sun angle, better light distribution in the greenhouse. The hurtful part? I will be in a quasi heat/cool cycle which is hard to manage. During the day, the greenhouse would easily exceed 100 degrees without power venting.  But at the same time, the air temp will still only be 40-55 degree which would cause wild temp swings if you just turned a vent fan on.  It also makes it hard to retain the heat you gain during the day because the Vents are temperature sensitive. and they need to be set at the highest opening temp because during the night the heater will be maintaining a 68-70 degree temperature.  But during the day you want the vents to start opening at almost the same temperature to keep the temperature from building up too quickly, causing the fans to kick on and start dumping cold air into the greenhouse.

Well if thats what march is like, what does april bring???  Well more of the same In my eyes. At some point in april the shade cloth will be put onto the greenhouse which will help us maintain a steady daytime temp. The overnight supplemental heating will be brought down to 60 since day time temps will be roughly that. And we hope for tons of bloom, while maintaining 70-75 degrees for the best pod set. We will then set our vents at our summer settings, as well as our swamp cooler. The goal is to maintain a temperature as close to 75 as possible for maximum growth, rebloom, and pod set/formation.

So why not sooner/later?   Well in my eyes you could do this sooner for sure,  but you will be doing it with less light, less light distribution, and a much higher heating bill. I also believe because of  daylight hours you wont get as much bloom, nor as many seeds.

Later? Well you could, but then you start dealing with higher daytime temperatures, you also would start backing up into your normal season... and I rather get my seed in June so I can get a crop planted in July.  Anything past that point in my eyes isnt worth all the extra effort of the greenhouse. Also, I would want the plants to be finished with seed as soon as possible so I can divide the plants out of the pots for fall selling, or donation.  While giving the divisions plenty of time to grow, rest, multiply before november.