The beginning is Near. 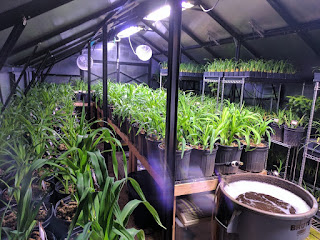 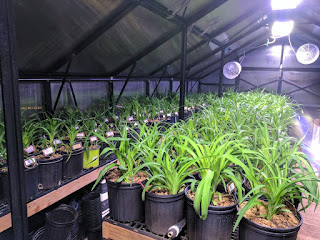 But here we go... some stats and info-

Average propane use- 3.5 Gallons a Day

So there's the quick stat sheet, Now let me go into some detail.

My average temp maintained in the greenhouse is pretty close to what I wanted out of january, I set out early in the process to keep it at 60 degrees in january.  The amount of propane used to overcome large heat differential from exterior to interior made me second think that plan for january back in december.  A very mild january allowed me to keep it pretty close. I cant say that, this will happen every year.

On the Flip side, we have had an extraordinary amount of cloudy days here, so I have not been getting my free heat from mother nature. I really do hope this changes, but with 13 out of the next 15 days forecast as cloudy.. I dont know if that'll happen.

This will become an issue sooner then later, The solar gain typically will bring the temp in the greenhouse up to 75 degrees. I need this to keep my temperature average up, without using too much supplemental heat.

So come febuary first, the plan is to maintain an average of 65 degrees.

A quick note about humidity... It is almost always wet in the greenhouse so far, and I really didnt expect that... But since the Air exchange rate is so low on purpose during winter, the water has no where to go.  A bonus to this is, you really aren't watering very often.

And onto the propane use... I am doing good here, I am pretty happy with 3.5 gallons a day.  That makes the cost of operating the greenhouse around 6 dollars a day.  I'm completely ok with this.

Watering, and pesticide use.  So let me get to the watering first-

Early january, I watered the pots for the first time once I saw almost everything was in active growth, I could have let it go a bit further, but I really needed to get the plants treated.

The second watering was a compost tea, It's the start of me trying to establish a positive fungal and bacterial environment within the pots and use less chemical fertilizer.

Onto the pesticides-  Now since all these pots have been outside, at the end of the year.. many fun things crawled into the pots, laid eggs, or just stayed in the pots. Job #1 was to lay down the foundation of pest management-

In my first watering, I used BTI and imidacloprid, This was to kill any fungus gnat larvae, and give the plants a systemic resistance to aphids, and other insects.

In two foliar sprays in January I used Avid 0.15sc, this is a adult Mite control product, It also controls fungus gnat adults, and aphids.  I had a little bit of all three since I took in some plants that had them survive in the foliage.

As of right now, I have no gnats, spider mites, or aphids. But I will continue to spray on the maximum interval.

I have had a new bug emerge from the soil, it's small, but visible, it's red...  I have not identified it yet, and will be taking a sample to the nearest extension office on monday for hope of identification.

Onto my Blunder-  Forgetting that you turned the drip irrigation on, and leaving it on overnight. It sure was wet in there the next day...

Lessons learned-   Don't leave the water on!   And that during the winter months... you won't be watering as frequently as you would think.

So time spent in the greenhouse... So going back to all the horror stories about owning one of these monsters... About 3 hours of that time was just cause I wanted to be inside.. the other three... watering, sprays, doing small things. This really isnt a ton of work.

Now, I can see if you got a bug infestation, or rust, or no heat/cooling, or no irrigation... there being frustrating times. Which is why this shouldn't be done on a "budget", while I'm not saying it cant be... if done so, I can see it being much more work without the automation.

Also, practicing control, having the proper fungicides, and pesticides along with following the rotation requirements of the products is KEY to controlling the insect population within your Greenhouse. I can't stress this enough.  And yes, I understand that there are a-lot of people who dont want to use chemicals, I am right there with you.  There are many "advancing" technologies that will allow less and less chemical control.  But for the moment, I am using the best product to control my problem, while also buying some new ones to test their efficacy.

But understand, this IS the perfect environment for you plants... and your bugs.