So It's December... And well It's definitely not going to be like last year.  For our region last year, we had stuff blooming on christmas!  The temperature this same day In 2015 was 68 degrees,  It was 70 on christmas Eve.

So that being said.  Our ground is already frozen, Most of my plants have gone down, and I can only hope for some snow cover soon to keep everything from a freeze thaw.

I am going to seal off 6 out of the 8 vents on my greenhouse in a few days.  There is just too much air leakage coming from them.  I bought a "delicate" duct tape for the job.

I added about 200 gallons of water in bins under the benches to help stabilize the temperature in the greenhouse, in addition to hopefully capturing the daytime heat from the solar gain. While releasing it at night... to help with the cost of heating the greenhouse.

And on that note. As of 12/7/16- I have used 100 gallons of propane.  With the super short days, the below average temperatures so far this month... I have noticed the needle moving way faster on the propane tank. 7 days after my last fill, the needle says I'm 60 percent fill.  I doubt the accuracy of this device on the tank.  But that would be an estimated 40 gallons of propane used over 7 days.  This is at the high end of where I want to be usage wise.

I have dropped the night time temperature to 50 degrees instead of 60. And added the thermal mass to help.  Once the pots are pulled in (tomorrow!!!) there will be a significant amount of thermal mass within the greenhouse.

We are about one month in on the seedlings. Everything is looking good. Looks to be 65-75 percent germination so far.  I will give them another 4 weeks before I start culling pots and condensing. 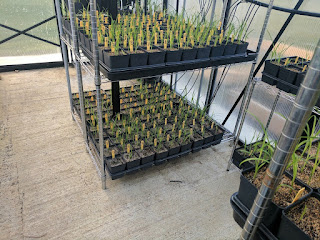 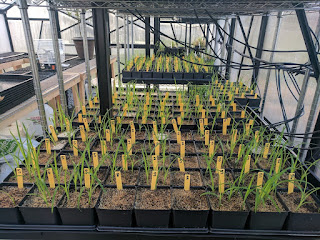 This coming week, they will get a final overhead watering with Banrot mixed in for damp off prevention, and BTI added in for fungus gnat control. After that everything will be drip irrigated in. 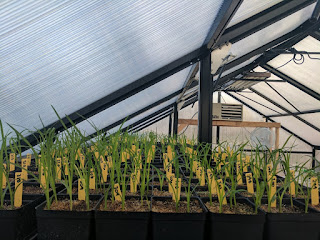 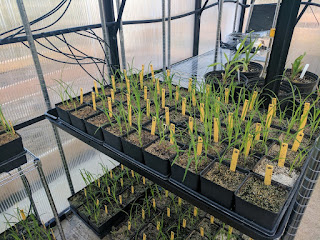